Well to be honest, a VL53L0X time of flight chip mounted on a small circuit board and then attached to a pan and tilt set-up positioned by 9g servos. 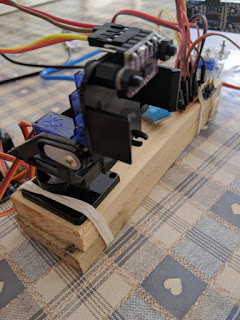 The data sheet for the VL53L0X chip is here.

Adafruit do a very nice little VL53L0X  board although they can also be easily sourced from a number of suppliers. I downloaded the AdaFruit Arduino wrapper for the device library to get me started. Communication is over an I2C serial interface which keeps things straightforward.

Connections from an Arduino are just to SDA and SCL as well as 5v and ground.

The tiny VL53L0X chip includes a 940nm VCSEL laser (Vertical Cavity Surface-Emitting Laser) fitted with infra-red filters giving reasonable immunity to ambient light interference. The laser is safe and will not damage eyesight. The device sends out a short laser pulse and measures the time taken for the light to be reflected back. The measurement range is up to 2 metres although the device is normally operated in one of 4 modes. There is a default mode, a high speed mode, a high accuracy mode and a long range mode. I think that all but the long range mode are good up to about 1.2 metres.

Initial tests using code copied and pasted from the AdaFruit example program confirmed that distance measurement was excellent – as far as I could see plus or minus a millimetre in a range to 50cm although my measurements were probably only just about that accurate anyway. At this initial stage, I was just pleased it worked.

I then added some code to get the pan and tilt servos working so I could scan a space in a sequence of horizontal lines. This got me thinking that I was effectively being presented with a low resolution 3D image – it just needs some more code (somewhere) to make sense of it.

The circuit could not be much simpler at this stage. 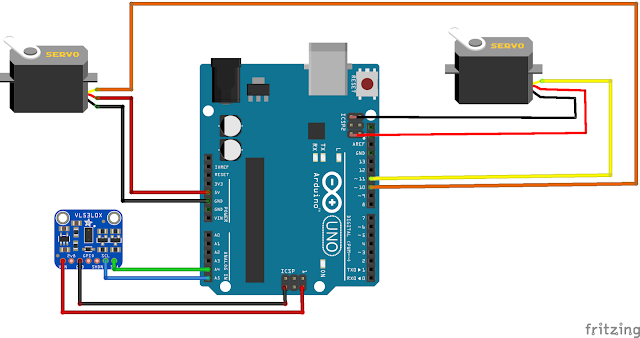 The first draft of the code, still using the simple Adafruit library wrapper, looked like this.


If you have a go at this then you would need to adjust the two values that set the neutral (straight ahead and vertical) values for the two servos as these will vary depending upon just how you put the pan and tilt together. It would have been nice if they were both 90 (the servo neutral position) but life did not work out that way.

A quick look around the Internet (May 2018) suggests that you could source all of the parts for this little set-up, ignoring the Arduino, for a few pence over £11.

I have been playing with plotting the distance measurements as a 3D surface and will report back on how that shapes up.

If you want to learn more about using the I2C serial interface or controlling servos then I can recommend my book "Practical Arduino C" available at Amazon.

I saw a link to Peter Norvig’s post on “ Solving Every SudokuPuzzle ” on Hacker News where he had constructed a Python program to do just that. His purpose was to cure the world of Sudoku but as Sudoku appears to be an ongoing although mild mental affliction I thought his solution might be worth exploring for the Arduino platform. I had a look at the JavaScript versions linked from the page as my Python knowledge is less even than rudimentary. I also had a good look at the C++ solution posted by Pau Fernandez . My draft plan was to write a solver for the MKR WiFi 1010 platform and to interact with it via an HTML page hosted by that board. Peter Norvig’s post explains how he applied constraint propagation to the task of searching for a solution that does not require waiting for the heat death of the universe to run to completion. Take a look, as he certainly explains it better than I can although I will have a stab at it. A 9 by 9 Sudoku grid contains 81 cells. The rules
Read more